How to help people and banish burnout

“Health insurance is such a political issue, talked about all the time and so dispassionately, that it can be easy to forget just how important it is to some families. But, last year the Census estimated paying for health care pushed at least 10 million Americans into poverty. In Washtenaw County, the Census estimates there are almost thirty-three thousand people without medical insurance. Three of these people are in the Romo family.

That includes Hunter Romo, a blond, bubbly four-year-old I met while he was coloring politely with his two cousins in the waiting room of the Washtenaw County Health Plan offices.

Hunter’s parents don’t make enough money to afford insurance. His dad, Felipe Romo, told me Hunter’s medical expenses have added up to thousands of dollars. Hunter has asthma. His parents need to take him to the hospital every time it gets out of control, or he could die.

Both of Hunter’s parents work, most weeks his dad puts in sixty hours at a restaurant. But, the restaurant depends in large part on a college student clientele. It isn’t busy year-round, meaning that the family’s income fluctuates and puts quality insurance out of reach.

After their appointment at the Health Plan offices it first looks like the Romo’s are out of luck. The Health Plan can’t cover Hunter because they don’t cover kids, and the families income was too high to qualify him for Medicaid.

But the people at the Health Plan offices try to help anyway. “We do try to give anything that we possibly can so they do feel they at least left with something and left with the thought that if they should need us at some point in the future we’re still here,” says Krista Nordberg, the Director of Advocacy at the Health Plan.

The Romo’s left the office with a promise their advocate would connect them withanother program that might cover some asthma expenses. The family followed up, applied and did get some help from that program. Later, the family re-applied for Medicaid and qualified. 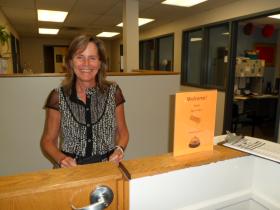 According to Nordberg consistent follow-up like that with the Romo family gives the Health Plan a good reputation. “Word gets out on the street that, the people at the health plan know stuff and they’ll help you. We like to be that holistic place where folks can come and get help,” she said.

The Health Plan office serves as kind of a touchstone for a lot of people with questions about forms, or systems and just want somebody nice to walk them through it.

While I was there taping my story a client was strategizing about how to keep his landlord from evicting his family. It’s not technically a health care issue, but nobody seemed to mind, and Nordberg, who used to be a legal services lawyer, was happy to help.

The office doesn’t fit a stereotypical image of a bureaucratic social service agency. Nordberg says that image is totally outdated, and she says she’s sure there are lots of other offices all around the state doing just as good of a job as the Health Plan.

“It has always been this way. There is an extraordinary culture of caring and helping,” she says.

A caring culture can’t increase limited funds. The Health Plan originated out of a lawsuit settlement because County hospitals weren’t abiding by their responsibility to care for indigent patients, eventually, that settlement led to a managed care plan and then a non-profit that survives on state grants and Department of Human Services funding.

Right now, the Health Plan can only afford to cover single adults with almost zero income and adults with a chronic condition living at or below 200% of poverty (about forty thousand dollars a year for a family of four).

Since they can’t provide health care to everyone, the staff works well with other agencies and has found low-cost ways to help more people. Workers ask every client to fill out a checklist of needs during an appointment they can then follow-up on like lower-cost bus passes, cancer screenings, or food assistance.

Recently, two Health and Human Services workers have started working out of the Health Plan office. Nordberg says this simple change has been huge for certain clients. “A lot of times we have people sitting here and they have questions about their food case. I can go and get an answer in a minute…Done.”

Kelly Stupple works with the Health Plan through a partner agency too, Washtenaw Success by Six. She works with pregnant women and families with young children like the Romo family. Stupple says even cheery Health Plan workers are not immune to the tough stuff that’s part of any social service job.

“It can be incredibly hard,” says Stupple. “I’ve had families lose custody of their kids or voluntarily relinquish custody because of their own circumstances or because of the child’s special needs. That is extremely painful.”

But Stupple, and Nordberg say there are lots of families they can really help. Stupple says she has seen steady, good, affordable health care making a difference in parents being able to go back to work, or school, or job training.

Nordberg says clients are very grateful when they are able to access the plan’s services. She says those interactions  keep her from burning out. “You know, a hug or two a day from a client, that keeps you going. There is no room for burnout there, really.””