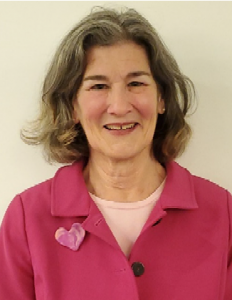 This September, WHI Communications Committee Co-Chair Liz Conlin met with Catherine McClary, treasurer of Washtenaw County, to discuss her multifaceted career, including her early history of working for women’s health—both in our county and nationally—and current aspiration to make Washtenaw County a more equitable community by dismantling structural inequalities.

Q. You’re a finance person. Can you explain your journey to becoming an advocate for health care in our county?
McClary. You know, it has been a journey. When I was a teenager, I volunteered with the Women’s Crisis Center—the first rape crisis center in the country. This was before “rape” was a word that people used publicly. We ran a 24-hour telephone crisis line and created programs and education to stop violence against women.
Being young, I learned some very important lessons about myself. I was not a good counselor. I flunked empathy training. But I discovered that my skills were in finance, administration, and strategic leadership. I could create programs for health advocacy and feminist education. And I could motivate others to implement these programs.

Soon after, I began working with a group that formed the National Women’s Health Network—a vibrant organization, still going strong today—that monitors the actions of federal regulatory agencies, identifies and exposes health care abuses of women, and mobilizes grassroots action for women’s health. I wrote the first bylaws and served on the board as their vice president for many years.
At both of these organizations, I found incredible women who mentored and guided me and gave me a strong feminist education pertaining to women’s health.
At the same time, I got my first “real job” in the private sector as a stockbroker and investment banker. I ran a branch office in Ann Arbor for a Wall Street-based firm selling securities. So that is where my financial background came in.

Q. What are some of your proudest professional accomplishments?
McClary. With others, I helped start the Assault Crisis Center, which is now run by SafeHouse Center, a refuge for women and children battered by intimate partners. We also changed the rape law, to provide degrees of criminal sexual conduct and marital rape, so that we could increase convictions statewide.
When I was a student at The University of Michigan, I was elected to the County Board of Commissioners, and served as Chair. In the early days, as a county commissioner, I wrote a non-discrimination clause that is still used today in contracts, hiring, and promotion practices. We were also the first to include LGBTQ and marital status in the county’s non-discrimination clause. I also co-chaired the campaign committee to pass a bond issue to build the center for SafeHouse.
Some years ago, I served on the board for NAMI, the National Alliance on Mental Illness. I learned a lot about people living with mental illness and why we need to treat behavioral health care on par with physical health care. We started a countywide mental health specialty court that assists people living with mental illness who’ve been charged with a crime.

I’ve done a lot of stuff professionally—and as a volunteer—that I’m proud of and which I believe has made a difference in people’s lives. But none of it I have done alone.

Q. Why did you join the Washtenaw Health Initiative and how has it been helpful?
McClary. When I first joined, I represented NAMI. But I [have] continued to participate in my capacity as the county treasurer because of the things I learn and people I meet by participating in WHI.

The WHI helps its participants make very worthwhile and strategic connections—among health organizations, non-profits, and the government. I just hope I’ve contributed as much as I’ve received. It’s been very valuable.

Q. What inspires you to continue working for improved health in our community?
McClary. I want to eradicate gender and racial disparities. The disparities we see in a person’s income and health are not just “one-offs.” They’re structurally built into our society and into our medical model.

The racial and economic gap that we have in home ownership really stems back to the federal government—through Veterans Affairs, the GI Bill, the Federal Housing Administration that provides mortgage loans. In the past, they would only guarantee bank loans to whites.

I initiated a program with the probate judge called Home for Generations—to assist families living in inherited homes that were purchased informally during times of racial segregation, redlining, and discriminatory lending.

There are people who have lived in homes in Washtenaw County informally for generations because their parents or grandparents had a white person buy the home for them on a land contract or a handshake agreement—meaning, they can’t prove they own the home. And they aren’t eligible for things like the Principal Residence Exemption, the homestead tax credit, or conventional financing.

The probate judge and I—with an incredible crew of pro bono attorneys and family mediators—are working on legal actions to record deeds in the names of the families they belong to.

The other thing I’m working on with the county’s chief judge is a tax foreclosure prevention specialty court.

Years ago, the Board of Commissioners agreed to create a social worker position to assist with collecting delinquent taxes—social workers can talk to people better than I can and work out what the issues are. It’s been a very successful program and now we want to expand it to the courts.

With a tax foreclosure prevention court, if there is someone who needs some court-ordered assistance to pay taxes, the judge could appoint a guardian ad litem [who acts in the person’s best interest]. That person can do an independent review and make some recommendations.

With the help of the Board of Commissioners, I’ve also established a revolving loan fund—Bridge Loans to Affordability. This fund helps catch up the taxes for people [now] in a sustainable situation, but for some reason, had financial hardship and missed a few years. So we’ll get their taxes caught up and then they can pay going forward.

We just want to eliminate structural racial and gender inequities in Washtenaw County.